How to Make Mashoon Hash 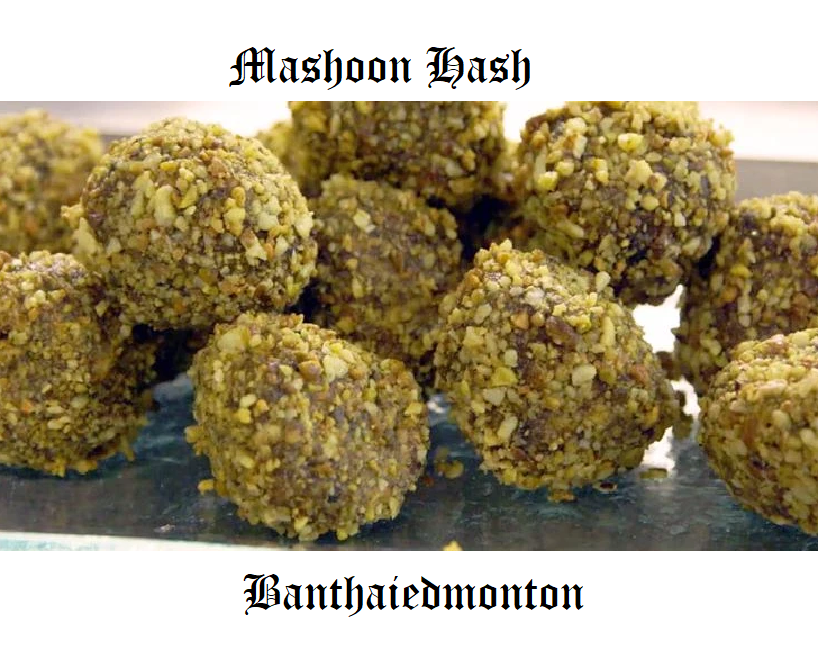 Mashoon Hash is an ancient recipe that originated in Morocco almost 3000 years ago. The recipe is not only delicious but is full of goodness. The no bake recipe is very effective and can keep you in a happy mood just with a ten gram portion. The no bake recipe will get you exactly what you want as most of the cannabinoids are preserved in it. The powerful and delicious recipe gets you to the right amount of buzz in your head.

Stoners have been creating cannabis edible recipes for centuries. Throughout history, and around the globe many cultures have found the psychoactive effects of THC to be beneficial to their bodies and minds. Some ancient recipes have been passed down from generation to generation and still survive today. These historic cannabis edible recipes have shaped the culture in those regions of the world by helping people to achieve higher meditation, better digestion, and pain relief.

Morocco has been known as a hashish capital of the world, and rightly so. This Mahjoun Recipe (also called Majoon, or Majoun) is one of the most potent cannabis edibles recipes, that uses kief or hash directly in the mixture, instead of cannabis oil or butter. Let’s be serious here, it’s not like they had modern methods of THC extraction and infusion back in the day. Even Alice B. Toklas, the mother of cannabis brownies used to just add the weed straight to the mix, or so my mother tells me.

You can find out How to Make Weed Cotton Candy here!

Mahjoun is a sticky confection from Morocco made with chocolate, butter, honey, a medley of dried fruits, nuts and spices, and a healthy dose of kief or hash. This exotic mixture can be made into a spreadable jam or bite-sized balls. The complex combination of nuts, spices, and chocolate reminds me of a cross between spiced holiday cookies and Chef’s chocolate salty balls but loaded with that extra kick of kief.

I originally made this recipe while living on a weed farm, with limited cooking facilities in an outdoor kitchen… My point is, Mahjoun is an incredibly simple no-bake edibles recipe that can be adapted to your taste in any number of ways. It’s especially convenient when you’ve got a thick mountain of kief built up on the bottom of your grinder, or trim bin.

Majoun is an ancient recipe of the nomadic Berber people. A group that predates Arabic settlers in Northern Africa. This fruity treat has been used for centuries to aid in self-healing and meditation and was usually eaten after dinner.

In the late 1950’s American expats discovered Majoun in Tangier, Morocco. Prominent authors and artists like William S. Burroughs (author of Naked Lunch) and Paul Bowles (author of The Sheltering Sky), found extreme inspiration from psychoactive binges on hash treats and other substances.

Traditionally majoun is made with “kif” the tiny clippings mixed with kief that we would call “shake”. You can use ground up weed or “‘kif” to make this recipe or go the extra mile and give your majoun that extra punch of pure kief. Alternatively, you can use cannabutter but the taste will be a little different.

The regional butter used to make Majoun is locally known as smen, a salted and cultured butter with a potent cheesy smell, which is made to last a long time. You’re not going to find smen at your local supermarket, so I typically use regular salted butter. You could also try Ghee, a clarified butter, as an alternative.

Cannabis is still highly illegal in Morocco, although many local men do smoke hash. If you are traveling throughout Morocco, especially with a backpack, chances are you’ll be offered some hash on the street. There are a few cafes in Tangier that have been made famous by the previously mentioned writers of the beat generation, where one can toke in good company.

Besides the indulging creatives of the Beat Generation, Mahjoun Cannabis edibles recipes have found its way into American culture on a few other occasions. The infamous Alice B. Toklas cookbook features a recipe for Hashish fudge, an adaptation of Moroccan Mahjoun, that was given to her by the avant-garde painter Brion Gysin. Alice states,

“It might provide an entertaining refreshment for a Ladies’ Bridge Club or a chapter meeting of the DAR [Daughters of the American Revolution]. In Morocco, it is thought to be good for warding off the common cold in damp winter weather and is, indeed, more effective if taken with large quantities of hot mint tea. Euphoria and brilliant storms of laughter; ecstatic reveries and extensions of one’s personality on several simultaneous planes are to be complacently expected.”

More recently, you can see Anthony Bourdain make Majoun in Tangier; check out Episode 5 of his CNN series Parts Unknown. Bourdain embarks on a clandestine mission to learn how this cannabis reci is made by dudes in creepy animal masks. But did he try the finished product? You decide.

“Of course, network standards prohibit me from even tasting this delicious and reportedly mind-altering treat, I’m guessing anyway. So until I see Chris, John, and Wolf doing bong rips in the Situation Room, I will, of course, abide by these rules, because that’s the kind of guy I am.”

This 1,000-year-old Berber recipe for spicy, savory-sweet mahjoun—Moroccan hash jam—is “the most legendary of all psychoactive confections.”

1. Preheat oven to 250° F. Place butter and powdered hash in a shallow Pyrex dish and heat on center rack for approximately 30 minutes to fully activate THC.

2. While hash is heating, in a food processor, add the nuts and gently grind into small pieces. Reserve 1⁄4 cup for coating jam balls and set aside.

3. Using kitchen shears or a paring knife, remove any stems from figs. Check dates carefully, removing any pits or hulls. Finely dice and set aside.

5. Remove butter and hash mixture from oven and place in a medium saucepan on the stove over low heat. Add flour and whisk to blend well. Continue cooking on a low simmer until foaming (4 to 5 minutes), stirring constantly just until roux is lightly browned, being cautious not to burn butter. Remove from heat and add salt. Stir to blend. Set aside.

6. In a large bowl, combine nuts and dried fruit, roux, honey, rose water, and 1 ounce of spice mixture. With clean hands, knead ingredients until well-incorporated, smooth, and thick, with a slight sheen. If necessary, refrigerate for 25 or 30 minutes before proceeding to the next step.

7. Using a small ice cream scoop or measuring spoon, spoon approximately 2 tablespoons of the mixture at a time and gently roll into balls. Coat/roll balls in reserved finely ground nuts. Store in airtight container and refrigerate for up to 2 weeks.